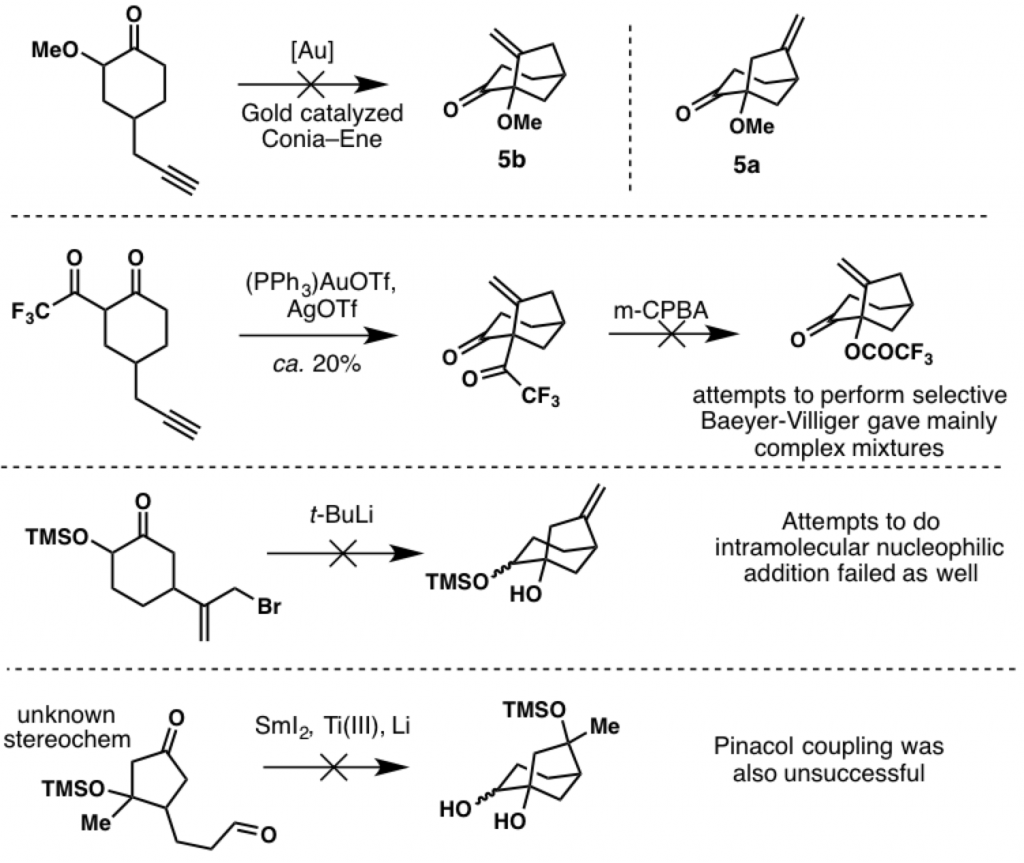 Maoecrystal V, or I how I learned to cope with my mediocrity

Greetings and salutations, ladies and gentlemen! Our total synthesis of maoecrystal V has been published in JACS recently. It is a fascinating molecule, in my opinion, with a beautiful array of densely interlocked rings, myriad of quaternary carbons, and an intriguing bioactivity profile to back it up (or not). It is no wonder, that it received so much attention from synthetic community, especially in the first five years after its publication in Org Lett. But don’t be fooled by that pretty face, this molecule is a demon in disguise! Making it in the lab is like having a crush on that popular girl in high school: no matter what you do or how much you try, the only thing you are going to get is a beat down by her much more handsome and stronger boyfriend. This pretty much sums up my experience working with this molecule.

On the very first day in the Baran Lab, I decided to go for the baddest molecule in town, perhaps out of shear arrogance, or maybe stupidity, but most likely a combination of both. At that time, at least in my eyes, such molecule was maoecrystal V. This decision took me on a hell of journey, a roller-coaster ride if you will, full of adventure and unexpected outcomes, that changed me as person and a semi-scientist. But that is the beauty of total synthesis, in my opinion, it pushes you to your very limits and that is when you truly realize what you can and can’t do.

The journey began with making the bicyclic ketone 5a or 5b, which turned out to be far from a trivial task. I am embarrassed to admit that it took me six months to actually make it. I have no excuse for that. The figure below summarizes some of the early failed approaches.

When the route to 5a had finally been developed (described in the paper), the stage was set to explore the key addition/pinacol rearrangement sequence. At this point, Phil probably thought, “Yea… this Cernijenko guy needs all the help in the world and then some”, so I was joined by an awesome post-doc Rune Risgaard. We actually made a really good and productive team because we were quite different and complemented each other really well. United by misery and failure, fueled by unhealthy obsession (both of us really really wanted to make this damn molecule) we became good friends and marched on to the battlefield. We had absolutely no clue what was awaiting us.

The pinacol rearrangement and hydroxymethylation is pretty well covered in the paper and there is additional information regarding these steps in the Supporting Information. Unfortunately, my therapist has forbidden me to discuss these steps to prevent further damage. Consequently, I will skip straight to the installation of the last carbon of the molecule. The cyanide was perfect for our purposes since it was a nucleophilic source of carbon that had the same oxidation sate as the ester and seemed small enough to react with a hindered C-8 ketone. The Figure below summarizes our attempts to accomplish this task.

To sum up, the reactivity was not the problem. Most of time time the yields were very good, stereocontrol, on the other hand, was an issue. The cyanide was always coming from the undesired face giving us exclusively undesired diastereoisomer. We tried different CN sources, Lewis and Bronsted acids, solvents, and additives. The outcome was the same in almost every case. Interesting example is the reaction mediated by I2 where CN approached from the desired face but attacked the more hindered bis-neopentyl ketone to give 28. I was very surprised to see the X-ray crystal structure and to this date I still have no clue how I2completely switched the chemoselectivity of this reaction. Other nucleophiles such as vinyl lithium, furanyl lithium, lithium 1,3-dithianes, corresponding Grignard and organocerium reagents did not solve this problem. We also tried blocking the undesired face by epoxidizing the C-15/16 alkene, but CN still approached from the undesired face. However, a very important result for us was the formation of 29 mediated by Zn(OTf)2because it is the only example where we achieved the desired stereo- and chemoselectivity. The compound itself was synthetically useless but it made us realize that if we form the THF ring first, CN might approach from desired face. Interestingly, that hypothesis lead to the synthesis that was published today. In total synthesis things can go from terrible to great in just one reaction.

Lastly, I would like to discuss the very last reaction in synthesis. It is quite strange to eliminate iodide with Oxone. Initially, we tried to engage iodo ketone 18 (formed as ~15:1 mixture of iodo epimers 18a (major) and18b (minor)) in classic base promoted E2 type elimination. But not even a trace of maoecrystal V was formed despite myriad of conditions examined. We believe that there was simply no antiperiplanar hydrogen available for the desired elimination to take place. While the minor 18b iodo ketone, in principle, should have underwent E2 elimination, we think that the chair conformation with axial iodide is highly disfavored due 1,3-diaxial strain. As a result, 18b’ is probably more accurate representation of its conformation, where iodide is pseudoequatorial on a boat.

This is where we got quite lucky. After oxidation of the iodohydrin with one of the commercial bottles of DMP, iodoketone was formed in excellent yield along with 2-4% of maoecrystal V as a by-product. The relevant portion of crude NMR is attached below.

How did it form? Freshly made DMP or other bottles of commercial DMP did not give any traces of maoecrystal V. It was just that one bottle that consistently yielded small amounts of maoecrystal V. What was in it? Long story short, we suspected that maybe it was contaminated with Oxone (which is used to make DMP) since oxidative elimination of iodide with m-CPBA was known in the literature (this reaction was very messy and low yielding in my crooked hands). Indeed, simply adding buffered aq. solution of Oxone to the reaction mixture resulted in very clean elimination of iodide to finally give maoecrystal V. That was a very good day in the lab.

We were able to make decent amount of this natural product using this route, as a result, we had the chance to explore its bioactivity profile with different collaborators. Unexpectedly, it turned out that synthetic maoecrystal V was not active in any of the cancer cell lines (even HeLa) tested. Our dreams of curing cervical cancer were shattered, but we received a lot of valuable lessons from this synthetic campaign. That was a hell of a ride! R.I.P MCV, I hope we will never meet again.