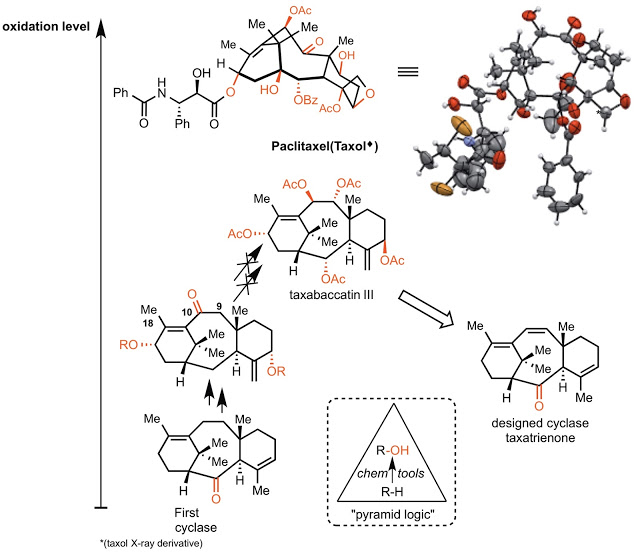 The B side of the Taxabaccatin Journey

When our latest success towards the two-phase synthesis of taxol was published in Angew this month, I experienced both joy and relief. From my first day in the Baran lab, I have spent the entirety of my postdoctoral career on the taxanes – looking back, I fondly recall many behind-the-scene stories in our struggle against these diabolical terpenes. I would like to recount some of them, hoping they will provide a more complete picture of my life as a “molecule synthesizer”.

I vividly remember the very first time I entered Phil’s office to discuss about my upcoming project. After a brief exchange of pleasantries, Phil suggested four possible options – amongst which is the taxol project. I noticed a subtle twitch in his face when he was pointing at taxol; his eyes lighted up when was describing our mission.I was given a week to make a choice. Nevertheless, I was instantaneously infatuated with taxol – after two days, I told him “I want the taxol project”. To date, I still feel I was blessed to have made the right decision.

While the medicinal importance of the taxanes can’t be overstated, what amazed me most was the beauty of their bowl-shaped skeleton. No drawing can do the mesmerizing structure justice, expecially for its highly bent B -ring. The whole molecule, is like a well crafted sculpture. When I joined the team, Nathan and Mine were inches away from taxuynnnanine D. On their C-2 deoxygenated taxanes, they painfully discovered that they cannot oxidize the C-9 position through the ketone at C-10 position, -the undesired oxidation of C-18 alongside unaccountable decomposition painted a bleak picture for a general approach towards the higher oxidized taxanes. I was therefore first given the task to explore the new taxatrienone, hoping to install the diol with the olefin on B ring.

Naturally, accessing this new cyclase end-point was our first goal – I spent 6 full months pursuing it and failed numerous times. You may spot many challenges related to our cyclase approaches without me diving into the excruciating details.  I was so energetic to work on new chemistry while making many friends in Scripps.

Eventually, I was able to devise the route shown below after wrestling bizarre physical properties of the intermediates while carefully tuning the reaction conditions. The first two reactions are worthy some discussions. The conjugated dienaldehyde was iodo-olefinated under Stork-Zhao condition. The initial result was promising that a 10 mg reaction can be directly eluted through a silica plug by hexanes to give good materials for the next step. However, on gram scale, as soon as I dropped the crude on top of silica- it was like dropping soup into melting sugar, everything was crazy boiled with all the iodotriene decomposed! An equally crazy solution was to freeze the hexanes and patched column with silica in -20 °C freezer first before slowly loading the crude on top of the column which was further wrapped with dry-ice – to afford acceptable yields were obtained on good quantity (5 grams considering the low MW). The next lithiation-transmetallation reaction was a total nightmare. I successfully made the product the first time I tried the reaction under standard Alexakis’ condition. But the next five tries all failed! At this time, one of my best friends, Yehua worked next to me, though he officially join the project a year later – we discussed my project frequently. I felt he was one of the most down-to-earth chemist I met who had exceptionally solid chemistry knowledge and excellent intuition. His initial instinct was that water might mess up the reaction due to the sheer number of reagents involved. I literatally try to repreat the reaction again and again to exclude all moisture – all to no avail. After 30 trials, no consistent pattern was seen. I was on the edge to give up, another strange idea emerged from my mind – maybe I should screen the base as a last shot. As shown below, everything was in a great harmony after picking nBuLi to do lithium halogen exchange, although we were unclear why the lithiated triene was only stable under such condition. Then the rest of steps met few difficulties. I could finally bring around 10 grams in total for the ensuing exploration.

Then Nathan wrapped up Taxuyunnanine D and joined the force – galvanized once again, I feel another success was within grasp . Yet, the nightmare resumed. I learned that I should never take seemingly mundane reactions for granted – even if it’s simply a ketone reduction or acyl protection. As the scheme shows, the C-2 ketone can never be reduced unless there was an alcohol on C-4 position. To be worse, the wanted oxidation on B-ring was impossible even with refluxing KMnO4 or TFDO on various substrates!

In the campaign we arrived to an exciting observation of the epoxide formation on the B-ring olefin as a pair of diastereomers! But when I examined the reaction, there are always something contradictory to this initial result. As shown below, the reaction spot was monitored on the left, with starting epoxide on the right and a co-spot in the middle. The first four TLCs on the left showed the reaction at 0.5 min, 1 min, 15 min and 25 min, clearly indicating formation of new compounds. Unfortunately, this spot readily decomposes during purification. However, if I left the reaction there for longer time, the spot would eventually transform to two polar spots which can be easily isolated.

A comprehensive study of the NMR was thus undertaken and I always observed one single carbon between 107 and 110 for both of the compounds. We finally agreed on the following structural assignment with the suggested mechanism shown.  Then I brought it to Phil’s office. “We should terminate this route”, Phil said. I calmly replied, “Yes, we should”. The time was June 2014 then.

All these stories were summarized into merely two paragraphs in the manuscript (and Angewandte still asked us to reduce the length of the text by 10%!). Nevertheless I still enjoyed all the experiences. This is why I love total synthesis: love is simply incomplete without any bad memories, just like a relationship. During these bad times, I developed a habit to save all my TLC plates to see how much resources I might waste before leaving this lab. You can see bonus pictures at the end of the story.

This lonely structure below was the third generation cyclase we made. Unfortunately we did not pursue this much further because of the risky exo-olefin. But I will use it as an opportunity to thank Lily Maloney – the visiting student who tackled this with me in three months.

At that time we decided to revisit our first cyclase, attempting to explore the influence of C-2 oxygen on the C-9 oxidation. This was pursued in three stages. We first started with the ketone on C-2 position, finding that the reduction of the C-2 ketone will never give the right alfa-configuration. Then the campaign towards the higher oxidized taxanes was attempted on the C-2 beta-MOM ether which also gave a negative result in that we could never oxidize the C-9 position. Eventually, setting the crucial C-2 stereochemistry upfront, we finally conquered the molecule three weeks before my set date to leave.

I have to wrap up here in order not to bore everyone. I almost felt I’ve failed before the amazing sodium-amalgam reduction. Prior to that, I may have spent too much time failing through this project. Nonetheless, for two reasons, my passion for total synthesis always stayed undiminished. First, there is something special about taxol – I am always fascinated by this molecule to press on. Second, this project has fostered strong bonds among the team. Yehua and I spent so much time together, crafting crazy ideas and beautiful solutions. We could simply stay up to midnight to figure out proper ways of quenching reactions. As for Nathan, a talented young man who is now a postdoc with Professor Corey,  I always cherrish the time we muscled through HUGE columns to purify hundreds of grams of crucial intermediates to drive the project forward! It’s precisely these memorable moments that make me love total synthesis, that motivate me throughout the project. Feel free to ask any questions in the comment section and I will be more than willing to answer them.