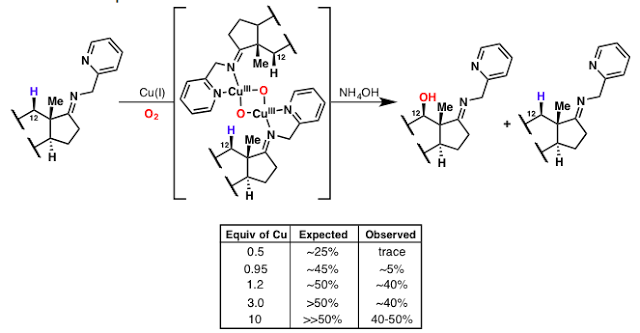 Our latest installment in sterol synthesis just came out in JACS, which describes a very interesting reaction in my opinion. While you can read all about the reaction development and the synthesis in the paper, I would like to share about some ‘behind-the-scene’ stories.

As chemists, I find it strange and surprising how risk adverse many of us are when we try out new reactions or plan a synthesis, I myself included. I totally understand it when you have barely any material when you are at the frontline of your synthetic war. But more often than not, I think we can afford to be more adventurous (not in the throw Na down the sink sense) in our daily chemistry. Well perhaps if I were more adventurous, I would have saved myself ~10 months and there would not have been Figure 1B in the paper. Truth be told, I was extremely skeptical of whether the Schonecker oxidation would even work; and when it did, would I be even capable of optimizing the conditions?

While there is still a lot of work to do be done on the Schonecker oxidation conditions, there were some interesting observations that initially led us to revise the mechanism of the reaction, at least under our reported conditions. Based on Schonecker’s proposal, it seemed clear that we are getting data that suggests that something else is happening other than homodimerization as the committed step in the reaction:

This, together with a bunch of experiments that were conducted (the most important ones are in the paper) eventually led to the mechanism that was proposed.

We also tried a bunch of other non-steroidal substrates, some of which gave some interesting products:

Notably, the cleavage of the cyclobutane in the second substrate gave good support for the radical nature of the reaction. Most of these eventually did not make it to the paper partially because of us running out of writing space but also because we struggled to push the imine formation to completion (but the oxidation seems to work great > 80% NMR).

There were also a whole bunch of other substrates that just ended up not reacting:

From the substrates that failed to work, it is clear that some form of steric constrain would help direct the reaction but as with everything in Chemistry, you wouldn’t know until you try. Then again, as organic chemists, why wouldn’t you want to run a reaction that starts off brown, turns green and allows you to oxidize stuff with oxygen in 3hrs?

Having made a bunch of pyridines in the process of optimization, I think this is where the next improvement would be found. Optimization of the directing group would almost certainly lead to a reaction with a broader substrate scope than we’ve shown. To top it all off, we made 3 natural products!!!

Clearly, the journey to the eventual publication was by no way direct and short and nice and rainbows and unicorns. But it was made a lot easier with all the people along the way! So a huge thanks to the LEO guys (who were always supportive and understanding) and my teammates, Yoshi and Aaron!

Previous post J. Org. Chem. is the new Zh. Org. Khim! Next post We made antroquinonol A then did things with it